WannaCry: 7 steps to protect yourself!

rudolf.bagi
Rudolf has been a digital marketer for over 12 years, and product manager for over 8 years. Having hands on experience in b2c, b2b marketing, his first contact with the security area was product development of an anti-fraud and bot detection system - covering the online advertising field. Currently working for Scademy Ltd, he oversees global marketing activities.

Our experts reverse engineered and analysed the code, our vulnerability analysis is published!

On Friday, 12 May 2017, the largest ransomware cyber-attack to date has been launched, called WannaCry,(or WannaCrypt, WanaCrypt0r 2.0, Wanna Decryptor) which by now infected more than 230.000 computers in 150 countries, demanding $300-$600 worth cryptocurrency called bitcoin. 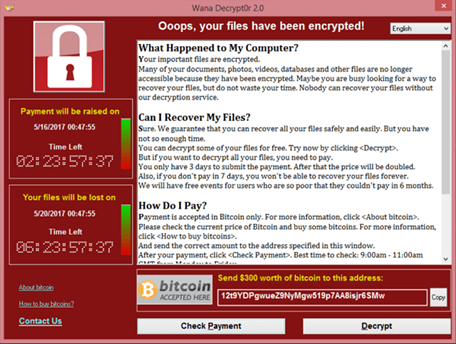 Rumors say WannaCry uses the EternalBlue exploit, which was developed by the NSA to attack computers running Microsoft Windows operating systems. Microsoft released a patch to address the vulnerability in question for supported systems (Vista and up) on 14th March 2017, but this did not prevent the attack due to delays in applying security updates and a lack of support to legacy Windows versions (e.g. XP) still being in use by many. Shortly after the large scale attack, Microsoft decided to release a patch – even for these no longer supported versions.

Just after the exponential spread of the malicious software, a researcher (nick: MalwareTech) found a kill switch, – there was an unusual domain name in the code, which he registered – and this has slowed the spreading of WannaCry. The cat-and-mouse game kicked-off immediately: new variants of the malware appeared, implying new kill switch domain names that had to be registered.

7 steps to protect yourself:

SCADEMY Secure Coding Academy courses teach your engineers how to code correctly to prevent bugs leading to similar infections; visit our course catalog to check our security courses. Get in touch!